For the last 20 years, Annette Nbasalaki a resident of Namalele Village, Mayuge district has been sleeping in a one-roomed mud-and-wattle house with her eight children and four grandchildren. 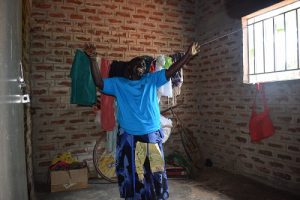 Whenever it would rain, her situation would worsen. Her house would leak, leaving her beddings wet.
“Having a pit latrine was a dream to me. My children used to visit neighbours’ pit latrines to ease themselves,” says Nbasalaki.
“Since the house was too small for such a big family, my husband left me for another woman, with no help,” she added.
The day she was asked to share her story, she did not know that she would be among those whose hope for decent shelter would be restored; today she is all smiles.
Nbasalaki’s story is no different from Lovisa Nangobi’s story. Nangobi, a 50-year-old woman, has seven children and nine grandchildren. She has been sharing with them a one roomed mud-and-wattle house in Namalele village, Mayuge district.
Her husband died 10 years ago, so she is the sole bread winner of her family.
“Due to lack of money, my children dropped out of school at the age of 16 and the got pregnant, which worsened my condition,” Nangobi narrates.
“The house I shared with my children and grandchildren started to leak. On rainy days, we would wake up and sit. Some children would have to sleep under the bed, to protect them from the rain,”Nangobi says.

Today, Nangobi and Nbasalaki are among the 42 families in Namalele that were given proper housing last Friday by Habitat for Humanity, an organisation that helps to improve housing facilities of local people in Uganda. 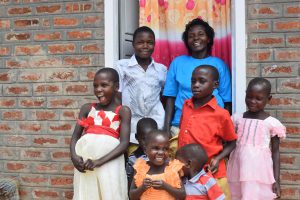 According to the Habitat for Humanity national director, Brent Potts, over 198 families have benefited from the Habitat for humanity housing facilities in Mayuge and they will continue to help families to have decent homes, as long as funds are available.He encouraged the residents to continue loving and being there for each other, so they can work as a team for the success of their community.The area MP, Robert Ntende, urged the beneficiaries to take good care of the houses they received and to fight poverty. A recently released housing survey by the Uganda Bureau of Statistics points at an improvement in housing, but states that there is still a gap to be filled if the majority of the poor are to fully realize this right.The survey indicates that Uganda has a housing deficit of 550,000 units. About 160,000 of this backlog are in urban areas. Kampala alone has a housing deficit of 100,000 units. Uganda’s population of 38 million, which is growing at a rate of 3.3% per year, is projected to increase to 63 million by 2030.

Building strength, stability and self reliance through shelter